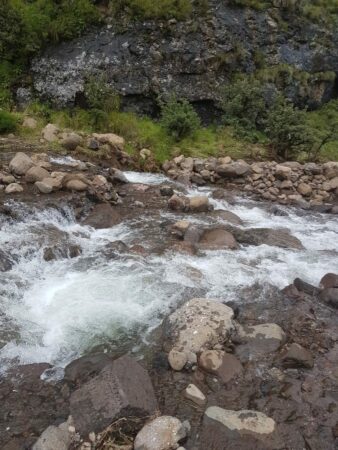 Water poured down the Sani Pass after heavy rains on Saturday night.  As I drove with up the Pass with Charles Major from Major Adventures, waterfalls sprayed from the side of cliffs and formed silver lines running down the sides of the mountains.

Earlier our guides and been stopped with all other vehicles from driving up the Pass by the South African Border Control.  The explanation was that during the darkness the rivers had swollen and sections of the road were washed away and impassable by vehicles.

Being very experienced in driving the Pass some of our guides were allowed through to ascertain the extent of the damage.  The Sani Mountain Lodge and some local Basotho residents had come down the mountain earlier and started repairing the damaged sections of the road.

As our vehicle climbed the Sani Pass streams and rivers merged to become raging torrents through the river bed.  I was in awe of the sheer magnitude of the panoramic mountains as the weather transformed the entire vista into a completely different mood.

As we rounded a bend, Warren a Major Adventures guide and some of his colleagues, standing in knee deep water, still in their  uniforms were filling a crevice with rocks. They were making the road just wide enough to allow a vehicle to pass through.

Further up the road we came to a group of our guides at Twin Streams standing in the swirling water and lifting and shifting boulders in order to fill the deep holes in the river bed caused by the storm.  Charles jumped out and moved into the midst of them whilst they worked in the spitting rain.

During the activity a lone hiker appeared at the edge of he water as he made his way down the mountain and suddenly hesitated on the river bank. Earlier when he had crossed the causeway on his way up it had been low enough to enable him to comfortably hop across the rocks.  Elias, one of the senior Major Adventures guides, saw the hiker’s concern and waded through the water towards the man.  He helped him move through the repaired areas until he was safely on the other side.  The man called his thanks over the sound of the river but Elias was already bending forward to lift yet another large rock. 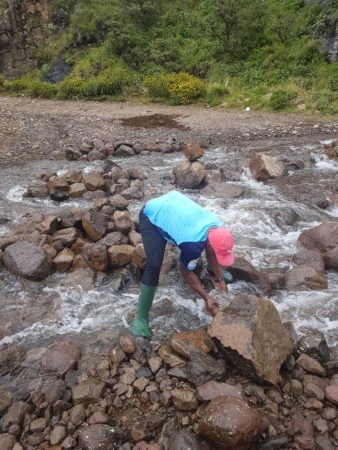 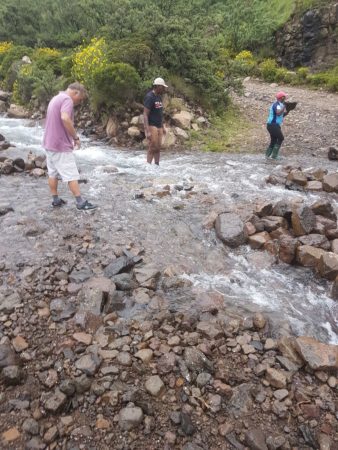 Finally Charles was comfortable that there should be no further impediments the following morning and that the vehicles should be allowed to drive through the Pass in safety.

By the following morning the road had been opened and it was business as usual.